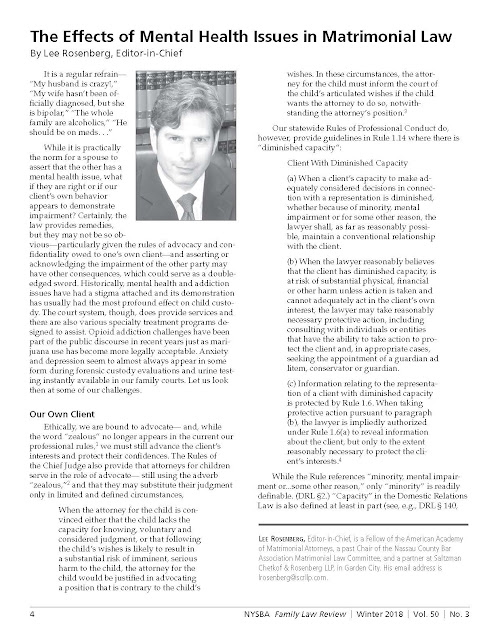 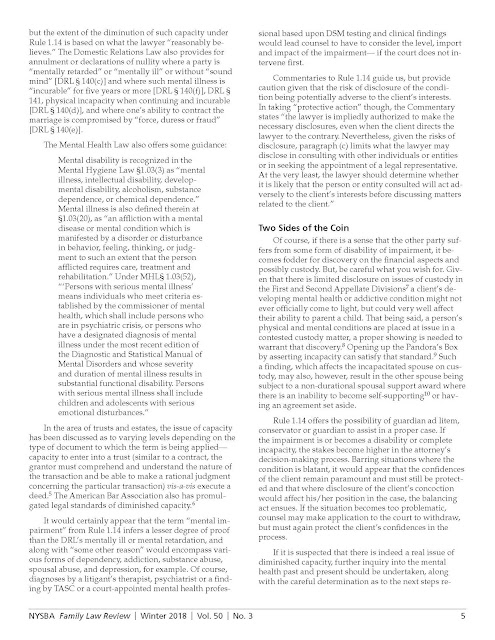 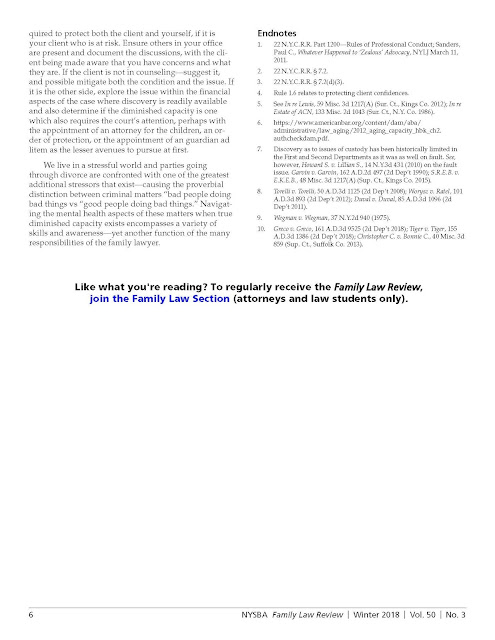 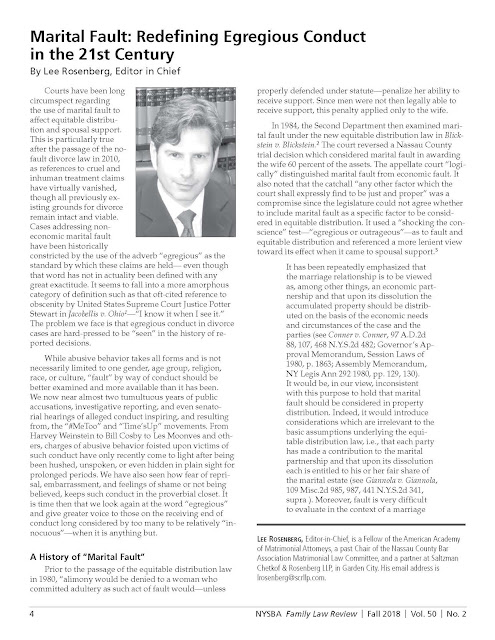 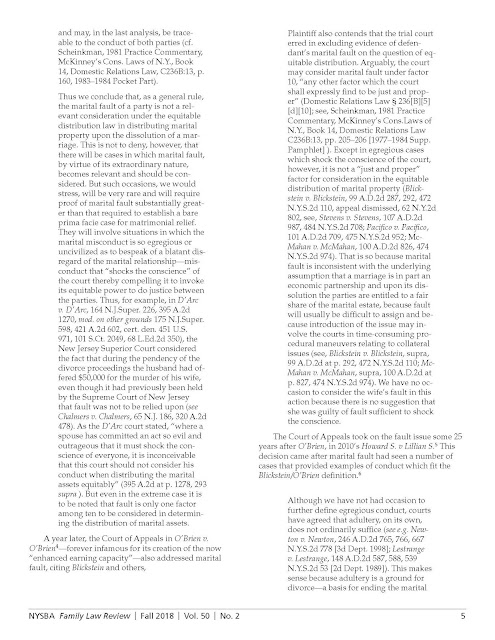 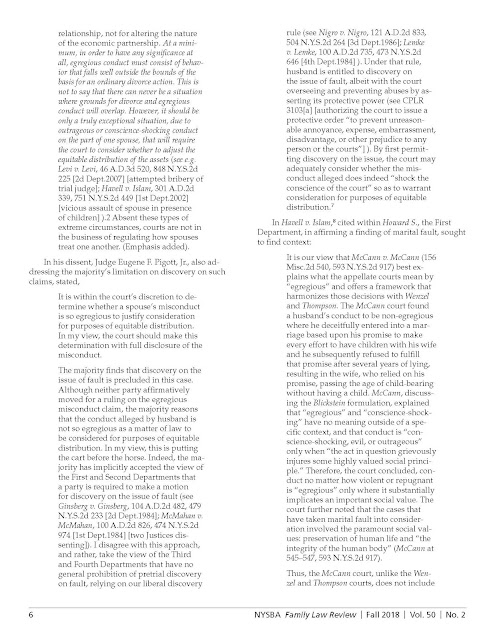 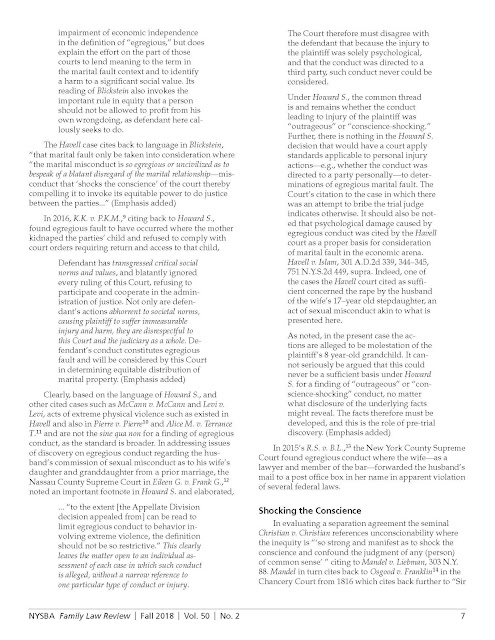 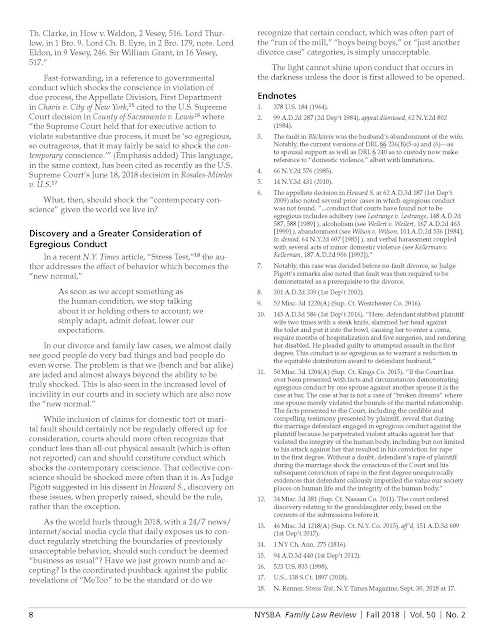 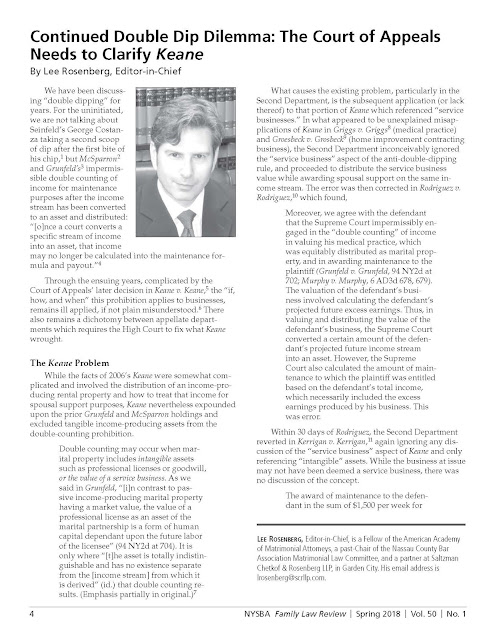 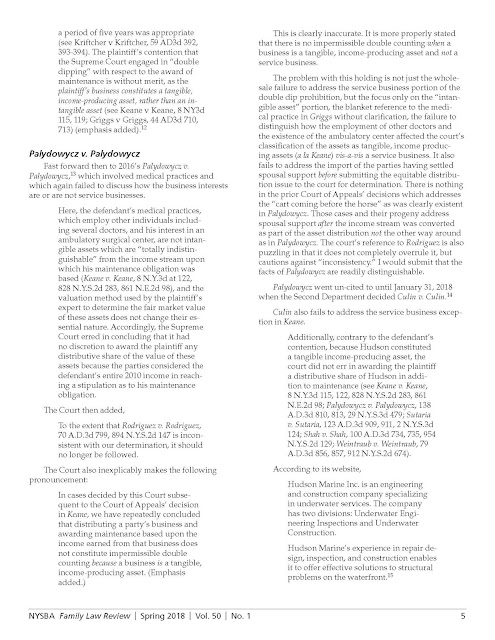 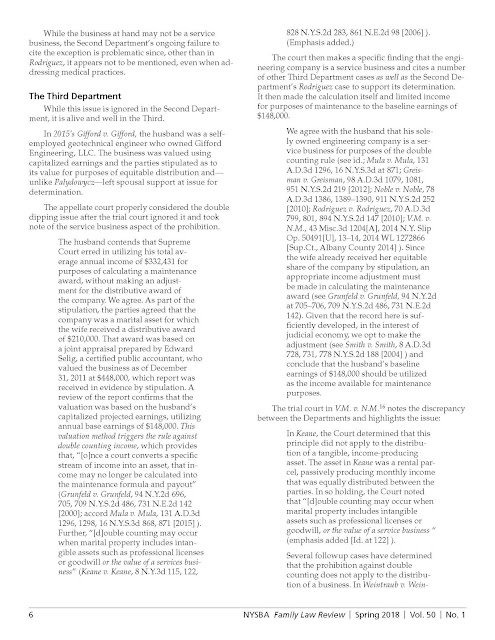 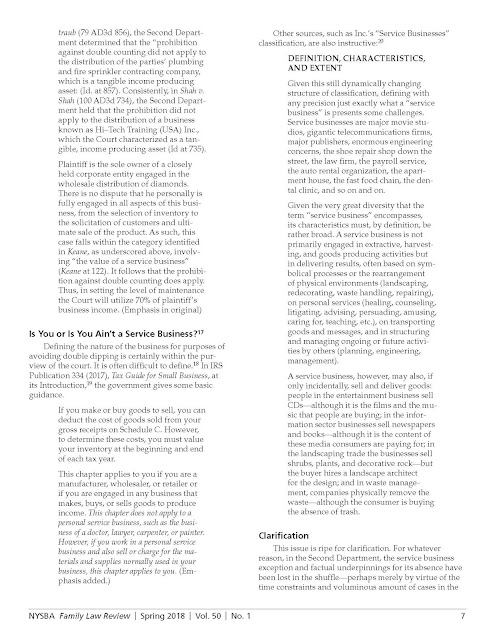 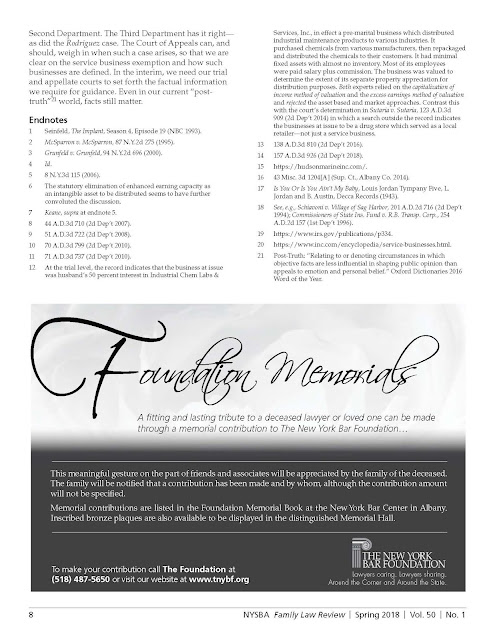 From NYSBA Family Law Review: My new article for Family Law Review addressing the change in the Tax Law: "THE END OF THE “ALIMONY” DEDUCTION UNDER THE “TAX CUTS AND JOBS ACT OF 2017": THE NEED TO DEVIATE ON PRESUMPTIVE SPOUSAL SUPPORT AND THE UNKNOWN FUTURE"

"THE END OF THE “ALIMONY” DEDUCTION UNDER THE “TAX CUTS AND JOBS ACT OF 2017": THE NEED TO DEVIATE ON PRESUMPTIVE SPOUSAL SUPPORT AND THE UNKNOWN FUTURE" 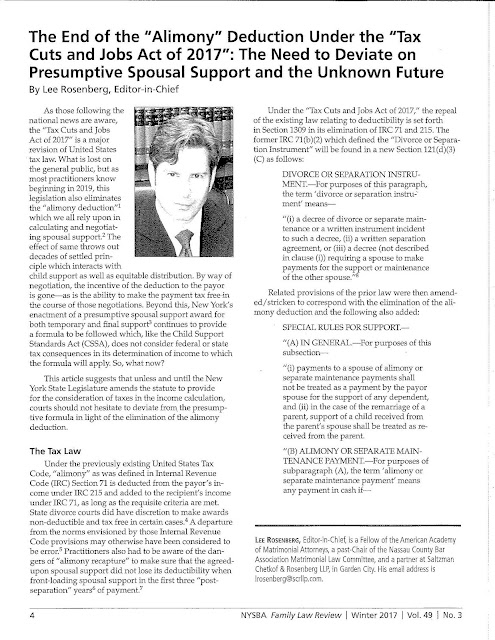 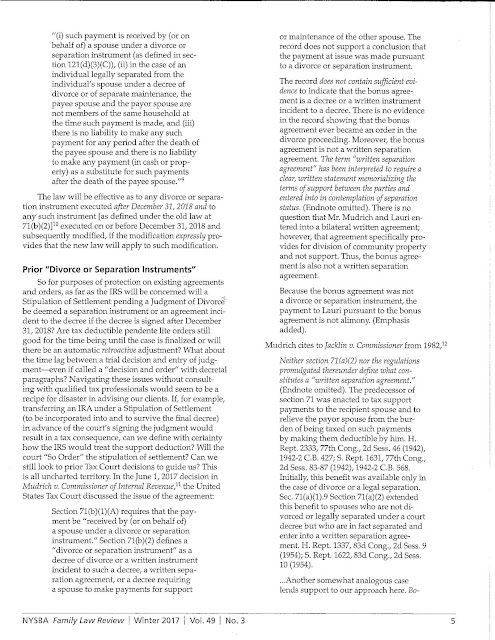 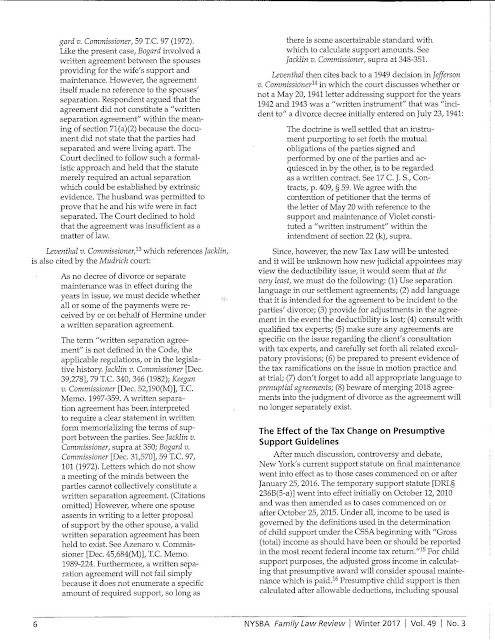 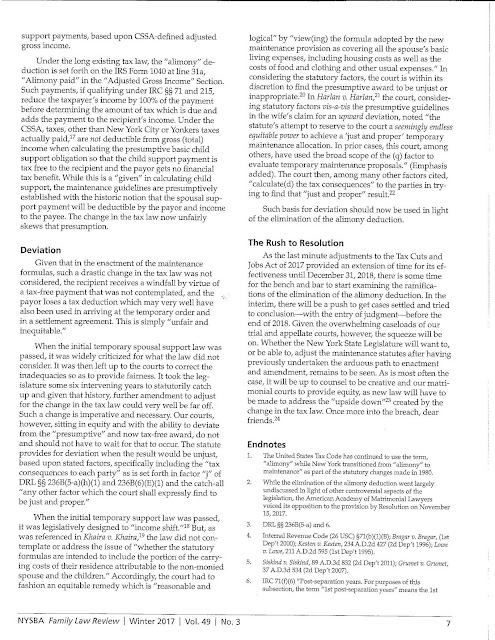 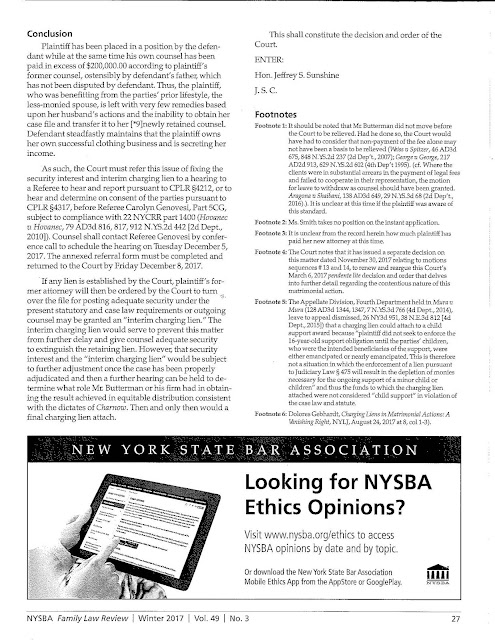 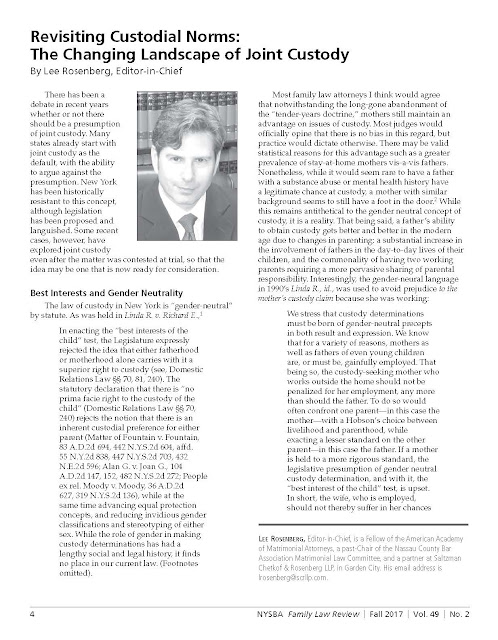 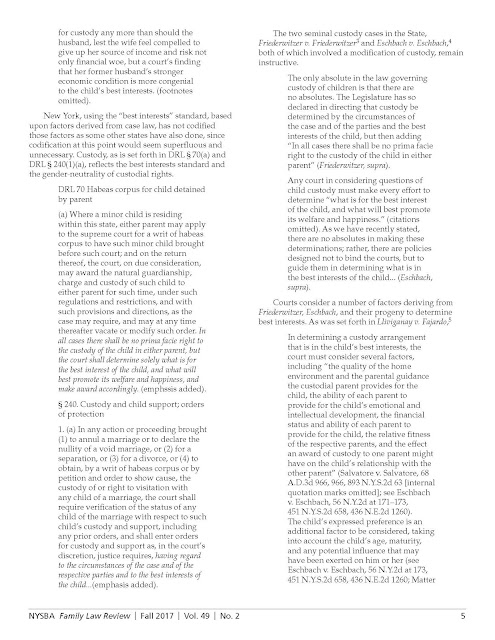 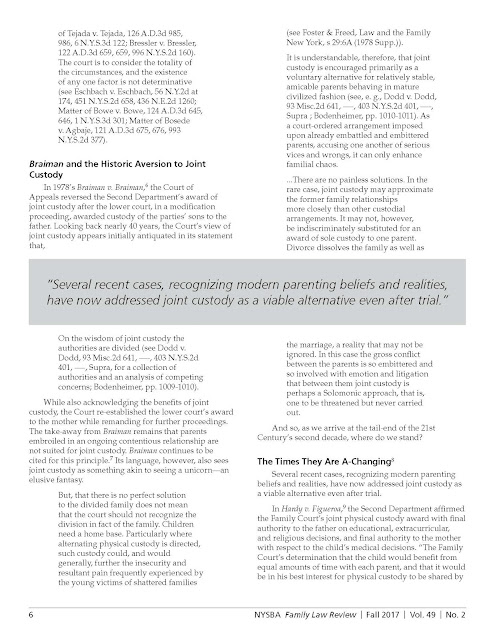 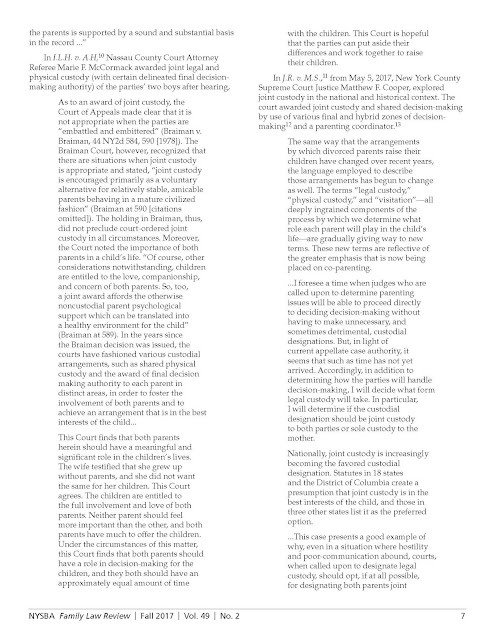 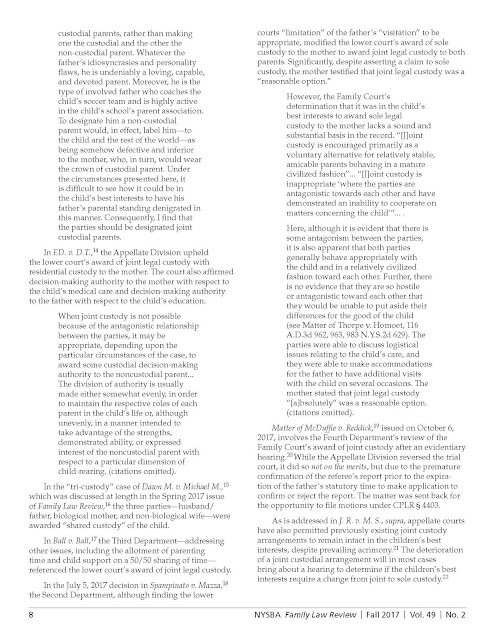 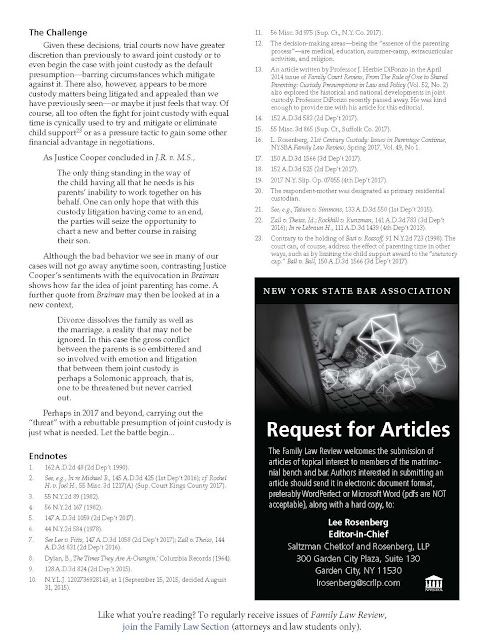 Court Reconsiders the Law on Exclusive Occupancy of the Marital Residence

Interesting analysis by Justice Dollinger on the issue of "exclusive occupancy" in L.M.L. v H.T.N., from October 3, 2017
L.M.L. v H.T.N.
"In this court's view, the "strife/available relocation" test, previously used by New York's courts, is based on an analysis of the conflict between the parents as it impacts the parents. The courts applying the "strife" test focus on whether the parents should be able to cope with the strife and, if parents can (or should be able to), then exclusive use and possession is not required. Merely invoking the word "strife" to describe an admitted level of domestic abuse and inappropriate behavior - and not excluding either party from the residence - may allow the "strife" to simmer into a higher level of disruptive behavior if the couple continue to be in close proximity while sharing the residence. Whether the parents can tolerate the strife or "petty harassments" ignores the more significant factor: whether the children, often without mature understandings of adult interactions and looking to their parents for examples of mature behavior, can tolerate the same level of "strife."What some characterize as "petty harassments" - caustic verbal exchanges, vulgarity, put downs- may be tolerable between two unhappy and divorce-seeking adults, but it is corrosive when overheard by children and directed against a parent they love. The deleterious impact of easily perceived intra-family verbal assaults, foul language and other demeaning behavior on children requires more discerning criteria as the standard for granting exclusive use and possession. In this case, it is undisputed that the children have already endured - and may have learned - he demeaning and destructive conduct of their parents.[FN10] Regardless of the party at fault, the consequence - verbal violence directed against a parent and observed by the child - erodes the child's sense of home life. By denying this application and doing nothing - sending the parties back to the neutral corner so to speak in the home - sends the wrong message to the parents and the children and, in this court's view, sends message contrary to the direction of the state Legislature. Without court intervention, the parents may assume that their behavior is permissible to the court: the children may assume that such behavior is acceptable within a family. Neither conclusion is in the best interests of the family unit."
Posted by Unknown at 10:10 AM 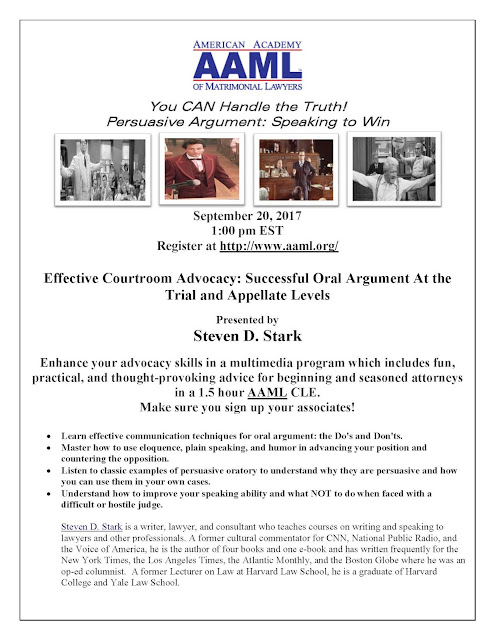