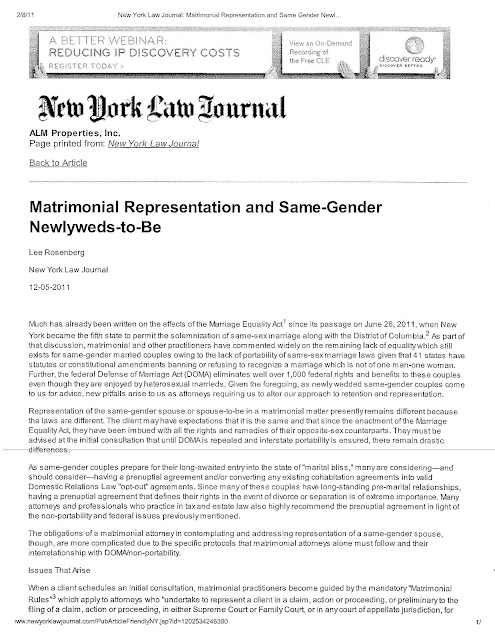 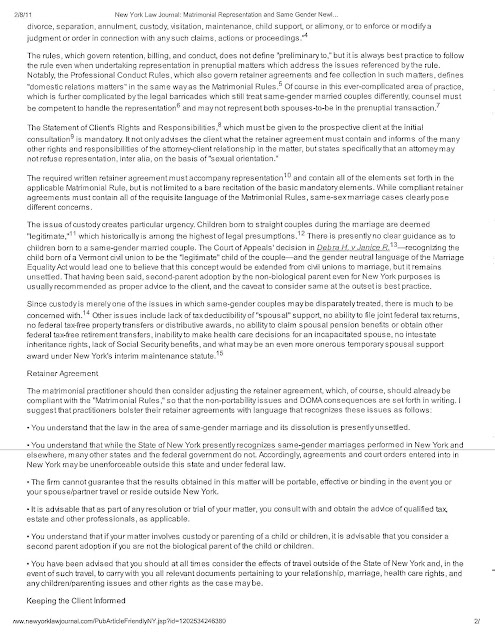 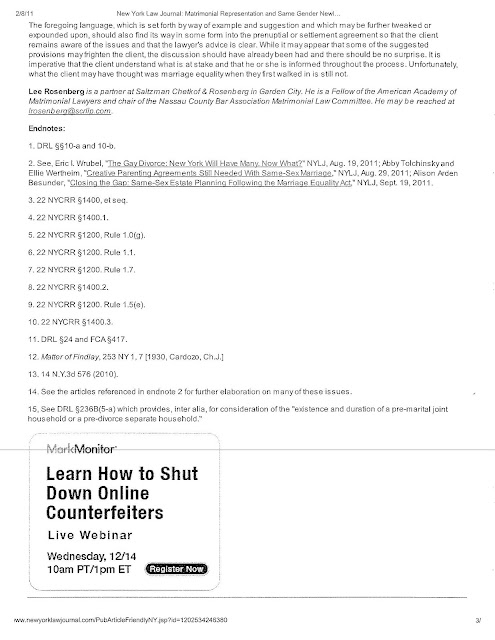 NEARLY BORN ON THE 4TH OF JULY: Same-Sex Marriage Passes in NY

NEARLY BORN ON THE 4TH OF JULY


We stand at an historic point in time where traditional notions of “marriage” have changed in the State of New York. We are the largest State to have enacted same-sex marriage legislation and by virtue of our proximity to other States which have enacted similar laws, this renovation of thought and acceptance has the ability to “procreate”.  Same-sex couples may now marry and claim their entitlement to their unalienable rights to “life, liberty and the pursuit of happiness” just as is provided in that most venerated of Declarations signed on July 4, 1776.

I have previously written and lectured on this issue. (See i.e.- “Same-Sex Marriage: Right to Divorce, But Not To Marry?", New York Law Journal, March 2008). Where New York was recognizing out-of-state same-sex marriages, it created not only a basic inequity to our own citizens, but in essence a farcical one. Those whose foreign same-sex marriages were recognized here, could then be divorced here. I then wrote that if one takes the position that marriage was the more “noble” state of being, and same sex-couples married out of state could legally divorce here, they must be afforded the ability to marry here and avail themselves of all which the more noble state of marriage provides.

The enactment of the “Marriage Equality Act” – approved by the full Legislature on Friday night and signed by the Governor shortly thereafter– provides equality to all on one hand and protects religious freedom on the other. We have then demonstrated the greatness of our system where, in essence, the rights of two minorities are protected and the whole is enhanced. Moreover, the right thing has been done.


In changing his thought process after running on an anti-same-sex marriage position, Republican Senator Mark Grisanti spoke his heart and mind stating:  “I would not respect myself if I didn’t do the research, have an open mind, and make a decision — an informed decision — based on the information before me. A man can be wiser today than yesterday, but there will be no respect for that man if he’s failed in his duty to do the work. I cannot legally come up with an argument against same-sex marriage. Who am I to say that someone does not have the same rights that I have with my wife, who I love, or to have the 1300+ rights that I share with her? […] I cannot deny that right and opportunity for someone, nor stand in the way for them to obtain the rights that I have. […] I cannot deny a person, a human being, a taxpayer, a worker, people in my district and across this state — the state of New York — and those people who make this the great state it is, the same rights that I have with my wife.”

As we readily approach another 4th of July, we understand that both “separate and equal” and “separate, but not quite equal”–  are wrong. So for those who spoke their minds honestly and to those who now have the same right to share their lives as wedded couples,  we should all be proud.

DivorceNewYorkStyle: THE OF IMPORTANCE OF BEING CHARLIE